Spousal abuse is one form of domestic violence in California. Whether the abuse occurs within a marriage or between unmarried intimate partners, the law is the same. However, a charge of domestic violence can impact divorce proceedings, so it is important to understand your rights as the victim of spousal abuse and to be aware that filing charges can protect you and your children in a divorce.

Spousal Abuse Is a Crime

The fact that wives are protected from abusive spouses by law is a relatively new concept. While a man's right to chastise his wife was abolished in the U.S. at the end of the 19th 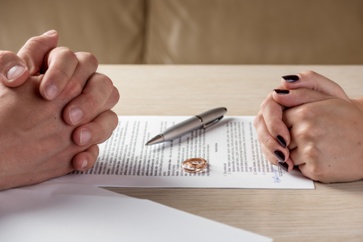 century, it wasn't until the 1970s that domestic violence in a marriage was really considered a crime. Finally, thanks in large part to the women's movement, police began responding to spousal abuse as they would any other violent crime. The belief that a wife could not accuse her husband of rape because of her marital duties also finally became outdated. Today, wives, girlfriends, exes, and same-sex partners are all protected from domestic violence by law. Domestic violence may take any of the following forms:

If you fear for your safety, or your freedom is limited by your spouse, you may have a case for domestic violence. Filing charges could send your spouse to jail, ensuring that you will be safe. Even when a case is not that extreme, filing charges could protect your interests during divorce proceedings.

California Is a No-Fault Divorce State

Violence in a marriage often increases when the abused spouse threatens to leave or asks for a divorce. That is why it is very important to make a plan ahead of time for leaving an abusive marriage. In California, you do not have to give a reason for filing for divorce, so it is not necessary to be the victim of spousal abuse in order to get a divorce, but a domestic violence arrest or conviction will make it harder for your husband to:

Because family court is not equipped to handle criminal charges, it is not a good idea to make domestic violence accusations during divorce or custody proceedings in family court. However, if you are pursuing charges in criminal court, or your spouse has already been tried and convicted, that fact can be presented in family court to support your requests regarding custody and financial support.

Even as a Victim of Abuse, You Need a Lawyer to Protect You in a Divorce

You might think the law is on your side as an abuse victim seeking a divorce, but your abuser also has rights, and his lawyer will fight to exercise those rights. You need an attorney who will fight just as hard for you. Divorce attorney Paul Nathan will be there for you throughout the entire process to handle paperwork, disputes, and answer any and every question or concern you may have. If you are a victim of spousal abuse and you want to file for divorce in San Francisco or Marin County, contact the Law Offices of Paul H. Nathan for a consultation.