If Your Ex Is Convicted of Domestic Violence, He Should Not Be Granted Custody of Your Children 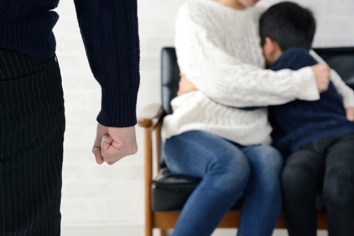 You got out of an abusive marriage to protect yourself and your children. Now you're worried that your ex-husband will be able to get partial custody of your children. You should understand, however, that the courts will act in the best interest of the children when deciding custody cases, and this includes protecting them from exposure to violence in the home. California Family Code 3044 protects children from parents who have been convicted of domestic violence. When the Law Offices of Paul H. Nathan represent you in a divorce or custody dispute, we make your safety and the safety of your children our number one priority. If you are the victim of spousal abuse, we will fight to protect you.

How Does Domestic Violence Affect Children?

In California, domestic violence includes emotional abuse and threats of violence. You don't have to actually be physically injured in order to file charges. If your husband committed any of the following against you or your children, he could be charged with domestic violence:

According to the National Institutes of Health (NIH), 80 percent of children living in violent homes personally observed violence towards their mothers. Even when you think you are hiding an abusive relationship from your children, they are probably aware of it. According to psychologists, children who are exposed to violence in the home often suffer long-term psychological effects. For the sake of your children, it's important that you get the help you need to get out of an abusive marriage. You could further protect your children by calling the police and filing official charges against your husband.

Preventing Your Abusive Ex-Husband From Getting Custody

When custody of shared children is disputed, it will be up to a judge to determine who gets what share of physical and legal custody. The judge will look at each parent to decide what is in the best interest of the children. Clearly, if you were the victim of domestic abuse, you do not want your abusive ex-husband to have even partial custody of your children. In California, the following questions will be asked about parties in a divorce:

If the answer is yes to either of these questions, Family Code 3044 will apply. This law states, "…there is a rebuttable presumption that an award of sole or joint physical or legal custody of a child to a person who has perpetrated domestic violence is detrimental to the best interests of the child." In other words, the parent who has been convicted of domestic violence will not be awarded sole or joint custody, unless he can rebut the charges with a preponderance of the evidence.

Because Family Code 3044 only applies in cases where the courts have been involved in a domestic violence case, it will help your custody case to file official charges against an abusive ex. However, even if there is not a conviction, you should inform your divorce attorney of any instances of domestic violence. This issue can still be raised with the judge, who will consider your testimony and any other evidence of abuse when making a custody decision.

Fighting for custody of your children, especially when you have suffered abuse at the hands of your ex-husband, is not something you want to do without the help of an experienced child custody attorney in California. The stakes are too high to try to navigate the legal system alone!

The Law Offices of Paul H. Nathan exclusively represent women in divorces and are particularly sensitive when it comes to cases involving violence and abuse. Paul Nathan and his staff will fight hard to make sure you receive the custody and support you're hoping for. Call us today at 415-341-1144 to schedule a consultation.